Students and Staff Shine at January Board Meeting

Lexton Christian is a first grader and was nominated by Cook Elementary principal Dr. Courtney Morawski. She says that Lexton is always on task, helping others, and going above and beyond what is asked of him in and out of the classroom. Lexton is the son of Leigh and Shawn Christian.

Spradling Elementary Principal Robyn Dawson nominated Ezequiel Claros because he is unique. He is highly intelligent, ambitious, and a role model in the third grade! Ezequiel is the son of Norma and Franklin Claros.

Braedyn Johnson is a third-grader at Euper Lane Elementary. Principal Gina Mann nominated Braedyn because he is one of the hardest working students his teacher has ever had!  He never gives up. Or says, “I can’t do it”. Braedyn is the son of Ashley Dickerson.

William Johnson was nominated by Woods Elementary Principal Andrea Schwartz because he truly knows how to make others feel special and important. William’s first-grade teacher, Mrs. Harper, says that he has an amazing work ethic. William is the son of William and Lorren Johnson.

Howard Elementary Principal Velmar Greene nominated first-grader Elmer Lopez because he has a big helpful heart and LOVES LEARNING! Elmer is the son of Maria Chavez.

Madaline Marshall is a 2nd grader at Carnall Elementary. Principal Dr. Taneka Tate nominated Madaline because she is diligent in doing her work to the best of her ability and assists other students in need without being asked. Madaline is the daughter of Thomas and Andrea Marshall.

Zyaunah Matano is a 2nd grader at Trusty Elementary and was nominated by Principal Dr. Shantelle Edwards because she is polite, hardworking, and kind and is a great example for her peers. Zyaunah is the daughter of Cheri Benson.

Sutton Elementary Principal Jennie Mathews nominated 2nd grader Celeste Rincon because she is kind and compassionate and a team player. Celeste is the daughter of Rosalva Rincon.

Deimy Sanchez was nominated by Morrison Elementary Principal Britney Ballin. Deimy is a third-grader and has shown incredible perseverance in every subject and always has a positive attitude. Deimy is the daughter of Manuel Sanchez and Martha Avila.

Created by teachers, for teachers, the National Board Standards represent a consensus among educators about what accomplished teachers should know and be able to do. This year, 12 of our teachers earned their national board certification title and joined more than 125,000 teachers across the United States who have achieved Board certification.

The ACT is an entrance exam used by most colleges and universities to make admissions decisions. Less than 0.2% of all students that take the ACT make a perfect score. Southside High School senior Jackson Minnick is a part of that 0.2% as he recently made a perfect 36 on his ACT. Congratulations Jack!

The 2020 Store/Cafe Marketing Contest sponsored by School Store Point of Sale, a partner of National DECA, is a business that installs, trains, and supports Private (Retail or Wholesale) Businesses & School Stores across the United States. The Grizzly Gear team Garrett Locknar, Carla Hernandez, Stephanie Canjura, Braylin McKinley, Pacie Passmore, Giselle Alvarado, and Giovanni Hernandez presented the success the Grizzly Gear store had with their “Christmas in Grizzly Land” and won 1st place in the state and earned $300! 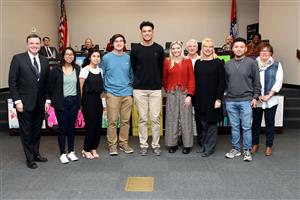 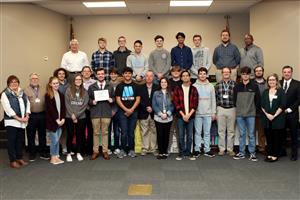 CyberPatriot is the National Youth Cyber Education Program created by the Air Force Association (AFA) to inspire K-12 students toward careers in cybersecurity or other science, technology, engineering, and mathematics (STEM) disciplines critical to our nation's future. One of Northside High School’s CyberPatriot teams consisting of Leslie Ajtun (Adj-ton), Azariah Hayes, Michael Luster, Zackary Carr, and Shane Morris won 1st place in the Silver Tier Competition in Arkansas and they are currently ranked 19th in the nation! 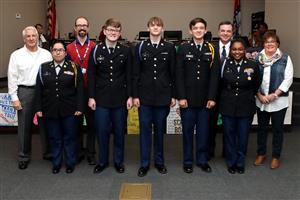